Around these parts, we are enormous Eve Babitz fans. Would we belong to a fan club? You bet we would. Proudly. If you don’t know from Babitz, not only is she a wonderful writer but she’s lived some kind of life, all of which is detailed in Lili Anolik’s smart and engrossing new book, Hollywood’s Eve. 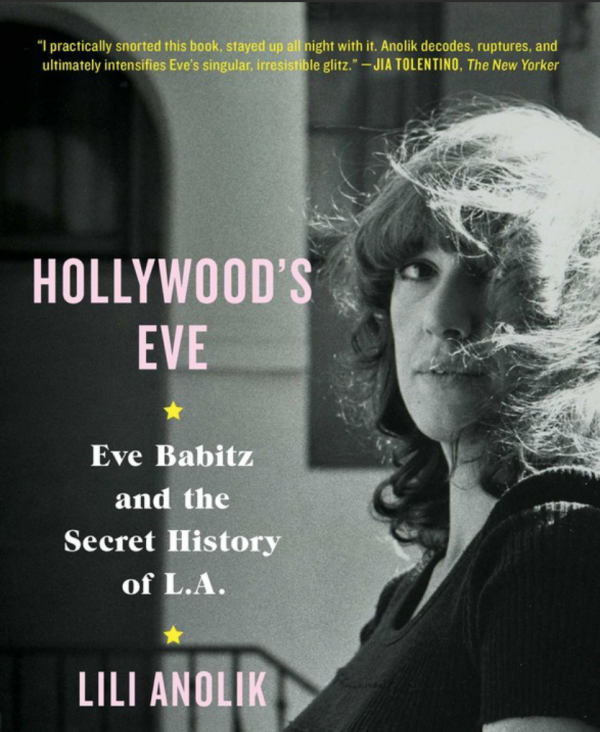 Over at Esquire.com, I’ve got a Q&A with Lili:

Anolik: One of the myths about Los Angeles is that it’s full of nothing but cute airheads, that no true artist would ever leave the East Coast—the cold, the gray, the urban ghettos—to come west. Like the palm trees and sunshine are out to get them, rob them of their seriousness and sense of purpose. But of course L.A. has Hollywood, and Hollywood actually pays artists, so artists were always there. And when Eve was growing up in the ’40s and ’50s, there were more artists even than usual thanks to Hitler. Jewish artists and intellectuals from the Old World abounded during that period. And a lot of them were in Eve’s living room. Her father Sol was a studio musician, but he was also a Baroque musicologist and Fulbright scholar who wrote the violin fingering for Stravinsky—Eve’s godfather, incidentally. And Mae, her mother, an artist, turned their house into a kind of salon. Arnold Schoenberg was there, and Stuff Smith, and Bernard Herrmann, and, naturally, Stravinsky and his wife Vera. So you have Eve’s background, which is European and High Art, and her location, which is Hollywood, California, the fantasy and glamour capital of the world, this trashy but potent milieu, and these two things fuse in her. That right there is her sensibility—the high and the low, the sacred and the profane, Igor Stravinsky and Marilyn Monroe.

And for a sampling of Babitz’s magazine work, check our archives for some fun:

Recently, in Ralph’s, my local supermarket where anything often goes, there I am trying to decide on some lettuce—lost in thought, idylls of watercress—when I feel a man behind me and quickly, before I can turn around, he says in a low, authorative purposeful salute: “Big tits.” And he’s gone.

That’s like seeing a movie star. You run up—with all kinds of fantasies beaming through your regular thought process—you run up to Cary Grant and say, “Cary Grant!”

“He’s such a sleaze, Eve,” says the only woman I know who’s immune to him. “He’s like the only guy in the eighth grade who knew about sex.”

“But someone had to,” I reply, thinking of the moment in Videodrome when James Woods spots this TV show of torture that at first he flinches from, but from which he cannot turn away.

Which is exactly how I feel about him.

Not that I like the eighties, but the sixties, if you ask me, weren’t that great, either. I mean, in the fifties, for men to get girls into bed, they had to be good lovers, to persist, to be sensual and seductive and inevitable and spontaneous and say things like “Stay away from me, I can only mean trouble.”

When I finally managed to get myself deflowered at the age of eighteen, the man was from that earlier milieu where being a good lover was the least men could do if they weren’t going to marry you. It really wasn’t until the “sixties” began, in about 1965, when the Beatles made being cute the be-all and end-all of the man’s part of the bargain. I think it was at the party for Donovan when Jim Morrison stuck his fist through a plate-glass window that I began to realize that love and sex in the sixties was really more like a bunch of people tasting appetizers, wondering who might be good for them if they ever, in fact, decided to stay in one bedroom longer than overnight.

I have been thinking that Linda Ronstadt is more politically effective than Jane Fonda. Linda has made the world safe for Mexican music. I mean, all Jane’s done is to go from being a movie star’s daughter to not quite apologizing for Vietnam with that Tom Hayden, the reason, I’ve heard, the women’s movement was instigated in the first place. The worst that Linda’s ever done is to think Jerry Brown was maybe a little cuter than he actually was, and who can blame a girl for that? At least she didn’t marry him.

It used to be that if a place were the hippest and innest and most likely to attract major beauties and stars of our generation, like Helena’s when it opened three or four years ago, you couldn’t keep me out. I mean, I’d move there. Nothing makes a me feel worse than knowing I’m missing the right party.

And yet I’ve never felt that way about Helena’s. In fact, I have never even been to Helena’s. I mean, I don’t even know where, downtown, it is.

These days women are always telling me that “there are no men out there.” This is not a new idea: Cosmopolitan is based on that premise, and the magazine is now twenty-five years old. But I myself have noticed that there aren’t any men unless you go forage in the brush and drag them kicking and screaming into, say, a movie. But what’s really amazed me lately is the number of women I know who actually have “relationships” (i.e., boyfriends, husbands, locked-in lovers) who say, “But we haven’t had sex in, oh, three years.” Or, “We had sex twice two years ago but…”

Once you feel what it’s like to dance with someone who knows how to dance, you’ll understand what I’m talking about. You may even come to realize, as I have, that dancing is better than sex. I mean that, I really do. It’s better because it’s a flirtation that can go on forever and ever without being consummated; because you can do it with strangers and not feel guilty or ashamed; because you can do it outside your marriage and not get in any trouble; and because you can do it in public, with people watching and applauding. And when you’re doing it right, you can’t think about anything else, such as what you forgot at work or that the ceiling needs painting.

Which is why women love to dance.

Check out Babitz’s finest—Eve’s Hollywood and Slow Days, Fast Company—and be sure to gobble up Anolik’s biography. You will be glad to know more about Babitz, she’s a riot.