Not long ago I crossed the Great Divide to attend a conference of writers and other literary types. The theme of the conference was “Literature and The Land”, which is hardly obscure. I mean, while a lot of people in America aren’t real sure what “Literature” is any more, everybody knows what “The Land” is.

“The Land” is a capital lettered, definite-articled, quotation-marked proper noun. “The Land” is vast deserts, roaring rivers, endless prairies, infinite skies. “The Land” is a kind of electric silence, too. Oh, there’s sound—anybody who watches CBS’ Sunday Morning knows the audio portion of “The Land” is the sound of one goose honking—but there’s none of the noise that people make because on “The Land” there are mostly no people. The few folks who are there tend to be the tough but taciturn types, and they live so far away you couldn’t hear them if they screamed. But mostly “The Land” is a symbol of the popular concept of what America is all about.

How “The Land” came to have such symbolic importance is a multiple choice question. One answer has to do with the fact that the continent was colonized by refugees from post-feudal societies to whom land was synonymous with wealth, power, nobility and even sexual conquest (droit de signeur is a dandy reason to want to be Lord of the Manor.) Another answer is that there was just so damn much territory out there that it almost had to mean something; crossing the country even in an era of Interstate highways and cops who agree that fifty-five ought to be the price of gas instead of the speed limit is practically a religious experience. To the first colonists, who had no intention of crossing “The Land”, but merely surviving it, it must have seemed a kind of god, for it presented dangers, disasters, deaths and despairs while at the same time—and often by the same means—offering bounty, beauty and boundless opportunity.

And boundless freedom. The price was high—mental isolation, material and cultural deprivation, physical hardship—but if you could pay it there was nobody there to stop you from doing what you damn well pleased, and nobody really had a reason to try. You might be a fool, but the vastness of “The Land” insulated society from your folly.

It is easy to believe in an open society when you can always move away from people who look different, talk different or worship a different god.

All of the above would seem sufficient reason for “The Land” to become a major factor in our national development—which it did, according to the “Frontier Hypothesis” advanced by historian Frederick Jackson Turner just before the Turn of the Century—and for us to adopt it as an archetype of our national unconsciousness, which we also did. For though, the Frontier Hypothesis notwithstanding, by 1890, the frontier was actually closed, we’ve kept it open in our minds and hearts through art, music, films, and literature, and thus preserved the Spirit of America, despite the fact that the closest most of us come to “The Land” is buying the Sierra Club Calendar. Which was the idea behind the conference, at which everybody celebrated literary efforts to preserve “The Land” . But as I sat listening to the acolades I began to wonder if the idea “The Land” might not be a little dangerous.

For the symbol of “The Land”, although romantic and evocative, encourages illusions. “The Land” makes heroes out of hermits, myths out of misfits, empirebuilders out of ego-maniacs and rugged individualists out of cantankerous coots who considered words like “cooperation” to be blasphemies, and permits us to forget that personality types who thrive on iconoclasm and elbow room tend to make better legends than neighbors; that in fact, part of the pioneer spirit is a fundamental desire to get as far away from the neighbors as you can. “The Land” also makes us think there’s something missing in our lives if we don’t “confront Nature”. The featured participants at the conference (who included a poet who appeared wearing a jacket and tie, an essayist who explores the wilderness on assignment from The New Yorker and a novelist who spent her childhood with the Indians but spent her adulthood in Hollywood) either stated or implied that, unless we all found a way to make like Dan’l Boone, we would never would never know the challenge that built the American character.

But the fact is “The Land”, has actually delayed real testing of the American character. For so long as “The Land” was “out there” you could escape whatever was “in here”. Not a bad thing if “in here” is the kind of society that persecutes people on account of their religion, prosecutes them on account of their politics, and forever limits their advancement on account of their parentage, but it is a querstionable thing when “in here” is a society that supposedly guarantees the right to express your beliefs and excercise your abilities without let or hindrance. In that case, “The Land” allows you to demand respect for your rights without deciding how much you respect anybody else’s. It is easy to allow freedom of expression to people you never have to listen to, and freedom of action when the actions can’t hurt you. It is easy to believe in an open society when you can always move away from people who look different, talk different or worship a different god..

In fact, the thing that symbolizes the true test of American ideals is not “The Land” but “The City”. For it is “The City” which today presents dangers, disasters, deaths and despairs while at the same time offering bounty, beauty and boundless opportunity, “The City” that demands determination and patience and true grit, that fully defines the concept of ecology. And it is “The City” that presents the fullest challenge to our ideals, for it asks us asks us not to escape our neighbors, but to look at them and listen to them, and balance the good of the whole against our desire to do what we damn please. “The Land” made the Bill of Rights abstract; “The City” makes it concrete … challenges us to make it work. 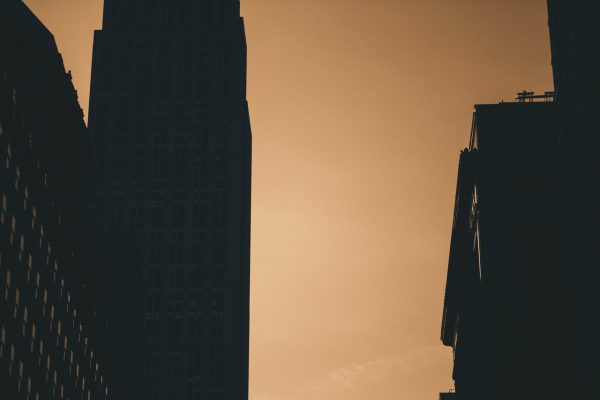 Sad as it may seem, “The Land” has become a symbol without substance. Oh, there are still wide open spaces, but if the “wilderness areas” have to be protected and you need permits from half a dozen alphabet agencies and the approval of Green Peace and Noah’s Ark to pitch a tent, let alone build a log cabin, “The Land” ain’t the wild, unfettered dream it used to be. Nowadays it is well nigh impossible to find a place where your nearest neighbor is so far away that you cannot see the smoke from his chimney, or smell the H2SO4, or feel the acid rain, and therefore argue you have a right to act like a fool because you aren’t hurting anybody but yourself. “The City” teaches us that there never really was such a place; it was simply the vastness of “The Land” that made it appear there was. Now, in a world that has instant communications, terrorism, and jet airplanes—things which make even the concept of national borders a little ridiculous—it is becoming obvious that a concept of freedom that depends not on accepting your neighbors but on escaping them is not only a delusion, but a dangerous one. And so it is our ability not to live off “The Land” but to live in”The City” that, in a modern age, is the test of survival.

Coming back from the conference on “Literature and the Land” I crossed in six hours “The Land” it took the pioneers six months to traverse. I did not touch real earth or smell real air or hear anything but the flight attendant’s PA announcements and the music in my Walkman™ earphones. But when I got back to my apartment in “The City” and opened my window I heard a lot of noise: sirens, car horns, somebody playing Beethoven on a radio, and somebody else’s stereo blasting Duran, Duran, one couple having a brutal argument, another making enthusiastic love. I cracked a can of beer advertised as being brewed in the high country from the purest water in The Land, and listened to the soundtrack of the New Frontier.