The Grandeur of Elvis These days, Elvis is always singing. In his stage-show documentary, Elvis on Tour, we see him singing to himself, in limousines, backstage, running, walking, standing still, as his servant fits his cape to his shoulders, as he waits for his cue. He sings gospel music, mostly; in his private musical world, there is no distance at all from his deepest roots. Just as that personal culture of the Sun records was long ago blown up into something too big for Elvis to keep as his own, so the shared culture of country religion is now his private space within the greater America of which he has become a part.

And on stage? Well, there are those moments when Elvis Presley breaks through the public world he has made for himself, and only a fool or a liar would deny their power. Something entirely his, driven by two decades of history and myth, all live-in-person, is transformed into an energy that is ecstatic—that is, to use the word in its old sense, illuminating. The overstated grandeur is suddenly authentic, and Elvis brings a thrill different from and far beyond anything else in our culture; like an old Phil Spector record, he matches, for an instant, the bigness, the intensity, and the unpredictability of America itself.

It might be that time when he sings “How Great Thou Art” with all the faith of a backwoods Jonathan Edwards; it might be at the very end of the night, when he closes his show with “Can’t Help Falling in Love,” and his song takes on a glow that might make you feel his capacity for affection is all but superhuman. Whatever it is, it will be music that excludes no one, and still passes on something valuable to everyone who is there. It is as if the America that Elvis throws away for most of his performance can be given life again at will.

Elvis Presley’s career defines success in a democracy that can perhaps recognize itself best in its popular culture: no limits, success so grand and complete it is nearly impossible for him to perceive anything more worth striving for.

At his best Elvis not only embodies but personalizes so much of what is good about this place: a delight in sex that is sometimes simple, sometimes complex, but always open; a love of roots and a respect for the past; a rejection of the past and a demand for novelty; the kind of racial harmony that for Elvis, a white man, means a profound affinity with the most subtle nuances of black culture combined with an equally profound understanding of his own whiteness; a burning desire to get rich, and to have fun; a natural affection for big cars, flashy clothes, for the symbols of status that give pleasure both as symbols, and on their own terms. Elvis has long since become one of those symbols himself.

Elvis has survived the contradictions of his career, perhaps because there is so much room and so much mystery in Herman Melville’s most telling comment on this country: “The Declaration of Independence makes a difference.” Elvis takes his strength from the liberating arrogance, pride, and the claim to be unique that grow out of a rich and commonplace understanding of what “democracy” and “equality” are all about: No man is better than I am. He takes his strength as well from the humility, the piety, and the open, self-effacing good humor that spring from the same source: I am better than no man. And so Elvis Presley’s career defines success in a democracy that can perhaps recognize itself best in its popular culture: no limits, success so grand and complete it is nearly impossible for him to perceive anything more worth striving for. But there is a horror to this utopia—and one might think that the great moments Elvis still finds are his refusal of all that he can have without struggling. Elvis proves then that the myth of supremacy for which his audience will settle cannot contain him; he is, these moments show, far greater than that. 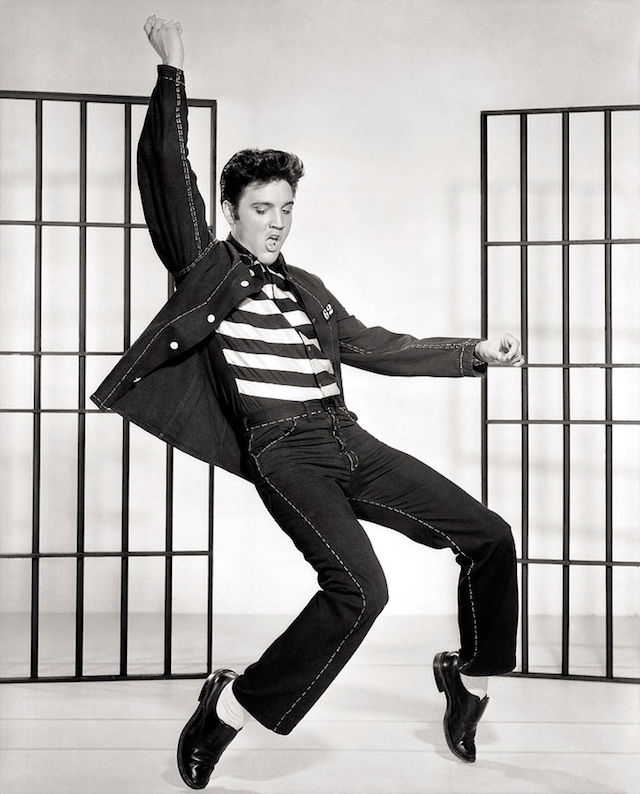 So perhaps that old rhythm of the Sun records does play itself out, even now. Along with Robert Johnson, Elvis is the grandest figure in the story I have tried to tell, because he has gone to the greatest extremes: he has given us an America that is dead, and an unmatched version of an America that is full of life.

All in all, there is only one remaining moment I want to see; one epiphany that would somehow bring his story home. Elvis would take the stage, as he always has; the roar of the audience would surround him, as it always will. After a time, he would begin a song by Bob Dylan. Singing slowly, Elvis would give it everything he has. “I must have been mad,” he would cry, “I didn’t know what I had—Until I threw it all away.”

And then, with love in his heart, he would laugh.

This excerpt was first reprinted at the Daily Beast.