The Cardboard God of Hellfire, our man Josh Wilker, has a new book out. I recently had a chance to ask him a few questions about it.

Alex Belth: How did this project come about?

Josh Wilker: I guess the series editor, Sean Howe, is a fan of my blog. He contacted me to see if I had any interest in working on something for the series. I wrote him back an email listing several of my favorite movies, including The Bad News Bears in Breaking Training. Sean liked the idea of me writing about Breaking Training rather than any others on the list, and I was into it, too.

I also would have gotten excited about writing about Bring Me the Head of Alfredo Garcia, but it’s probably better for my mental health that I focused for a long while on Tanner Boyle and Kelly Leak and Alfred Ogilvie rather than Warren Oates and a severed head.

Alex: How long is the book—it’s really a long essay, right?

Josh: Yeah, it’s not that long, maybe a little over a hundred pages. I just checked the Word document I sent the editor—it’s about 30,000 words. It’s got chapters though, which is kind of book-like. I think the idea was for the books in the series to be similar to those in the 33 1/3 books on albums.

Alex: I love that this is a pocket paperback. When I got it, the first thing I did was see if it fit in my back pocket. There is something so comforting about that.

Josh: Right, all books should be that way. Nothing better than heading out the door and not having to carry anything and still have something to read on the train.

Alex: What was the first baseball movie you saw as a kid?

Josh: Breaking Training was probably the first. I’d read a lot of baseball books by the time I saw that movie, but I don’t think I saw any other movies. I guess the first time I saw any sort of fictional baseball on the screen was when Bugs Bunny took on the Balboniesque sluggers on the Gas-House Gorillas.

Alex: Why did you chose it over the original Bad News Bears?

Josh: Probably because I suck. There are lots of other reasons, too, among them that the second movie had a much stronger personal connection to me and felt more like my own flawed little love rather than a generally acknowledged classic. Also, the second movie seemed to me to have much more potential as a jumping-off point to talk about a lot of facets of American culture that fascinate and/or nauseate me, such as the central American myth of the road narrative, the changing ways in which children are raised in America, the malignancy of sequels, the “man alone” myth, etc.

But above all that, if I’m being truthful, I don’t see myself as worthy of tackling something canonical. I’m too flawed to be some learned authority shedding light on Citizen Kane or The Godfather. I relate to the lesser sequel, even love it, and wanted to sing its praises. Maybe it’s kind of a “Charlie Brown Christmas tree” kind of thing.

Alex: When did you see the original?

Josh: Unlike my first viewing of The Bad News Bears in Breaking Training, which I remember vividly, I don’t remember when or where I saw The Bad News Bears. In line with a life that has often felt like an aftermath, like I arrive everywhere just after the things that mattered occurred, I saw the sequel first, and it was years before I saw the original. I probably saw it in my twenties, during which I spent a lot of time catching up on all the classic movies from the 1970s. If I were a couple years older, I probably would have seen it in the theater when it came out, and I’d surely have a different relationship to the two films. 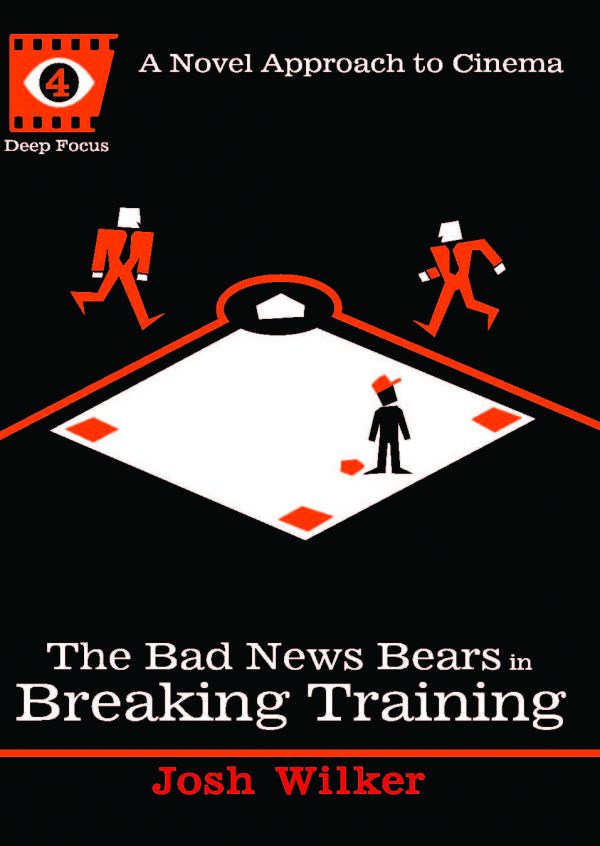 Alex: What did you think of The Bad News Bears when you finally saw it?

Josh: It’s a fantastic movie, one of the last great films of the gritty late 1960s to mid-1970s golden age. I don’t recall my first time watching it, as I’ve said, but I’ve watched it many times since then—as with Breaking Training, I own the DVD. Walter Matthau is, of course, brilliant, and I also like the occasional long reaction shots some of the Bears get to have, those long wordless shots that you don’t see anymore in movies (and which were gone even by the time of the sequel two years later). Jimmy Feldman gets one of these, as does Rudi Stein, in both cases showing a heart-wrenching human kid reaction to Buttermaker getting caught up in a “win at all costs” mentality. Both of these characters are marginal, so the fact that they each get to have one of these moments lends a sense to the movie that everyone is worth something.

Alex: Where did you see Breaking Training?

Josh: I saw it at the Playhouse Theater in Randolph, Vermont. In piecing together my personal experience of the summer of 1977, I came to the conclusion that my brother and I would have seen the movie during our yearly two-week summer visit to see our dad in Manhattan, but we lost a couple of movie-going days due to the blackout. It was good to see it back home, because I saw it in a theater packed with all the kids I played little league with, which could not have been a more receptive audience. It’s the most alive, enthusiastic movie audience I’ve ever been a part of.

Alex: Was going to the movies a special occasion for you as a kid?

Josh: Yes, I didn’t get to a lot of movies because I lived out in the boonies. For this reason, movies were the focal point for my brother and me in our trips to New York to see our dad. We swarmed to the movies during those two weeks.

Alex: Did you sit through it more than once?

Josh: I saw Breaking Training for the first time at night in a small town, and I think there might not have been any showings afterward. I remember we all cheered at the end, and probably after that we all burst out of the theater all charged up. I was staying over at the house of a friend who lived in town, near the theater, and I’d like to think that as we walked back to his house with the other kids who lived near there we were all chanting, “Let them play.”

Alex: Which of the Bears can you identify with?

Josh: I identify with Ogilvie because of his glasses and penchant for baseball stats, and I also identify to some extent with Carmen Ronzonni, not for his surface bluster but for the anxiety underneath, his belief that he needs to be a big fake because at his core he doesn’t have anything solid or valid.

Alex: Which one did you fantasize about being?

Josh: I think I fantasized that I could just sort of slot myself in with the “chorus,” imagining that I could leap onto the van as myself as I was in 1977, another faintly Jew-y curly-haired kid with glasses, somewhere on the spectrum in the midst of Jimmy Feldman, Ogilvie, and Rudi Stein. Of course, I also worshipped Kelly, and I guess my eventual drift a few years later toward being a kind of premature burnt-out, world-weary pothead was in a way a reach toward the untouchable cool of Kelly.

Alex: And did you walk around quoting lines from it? If so, which ones?

Josh: You know, I can’t say that I did. I think it must go back to the fact that I saw it just that one time in a theater and then that was it, so I wasn’t able to fetishize its particulars as I did Star Wars. It existed whole cloth. I certainly remembered the “Let Them Play” chant, and I also remembered and laughed at the “don’t assume or you’ll make an ass out of you and me” routine that the meathead coach goes into at the beginning of the film.

Alex: Did you see it before or after Star Wars, which came out earlier that summer?

Josh: I do know that I saw it after seeing Star Wars twice within two weeks with my brother and father in New York. Then I saw Star Wars again when it finally made its way to Vermont and went on to see it again and again through the years because it was so readily available.

Breaking Training, by contrast, just came through my life that one time early on and then disappeared for a long time, and it became a more intimate personal memory that way. As I mentioned, I now own the DVD and have watched it many times while working on the book. When I first saw it as a 9-year-old, I sincerely thought it was flawless. Now I see its many flaws, but I still love it. When Tanner makes his stand at the end, I always get a little choked up, even after all these viewings.

Really, to amend an earlier answer, in some ways I most related to Tanner, even though I knew I wasn’t as tough as him. Like him, I really didn’t want the game to end.

Alex: You write about the social events of the day in your book. How did the movie relate?

Josh: Well, I try to drag my father into the book, which is funny, because the film is about as far removed from his sensibility as any film could ever be, a supreme example of what he would call “drek.” But I wanted to find some way to give voice to some of his thoughts on the collapsing world economy, which his studies on world-systems theory have led him to believe began in the 1970s. There are certainly signs of that collapse in the movie, which is itself a capitalism-prompted deterioration of the aesthetically purer world of the first movie.

Also, you see clues that the movie is something of a crystalline distillation of a white male American fantasy of total childish freedom on the road, of women and people of color (e.g., Ahmad, who is reduced to a broad caricature in the sequel) marginalized. My dad’s feeling is that people should not just capitulate to the powers that be, however, and I try to channel that thought into an appreciation of Tanner’s stand at the end, and into some similar stands in that time of malaise and decline.