Why Has the Fun Fled Fun City? They all stood there waiting for the helicopter to come down. You had the feeling some of them wouldn’t have minded if it didn’t make it on its own power. Up in the sky was the mayor of New York, John V. Lindsay. He was coming to the corner of Plaza Street and Flatbush Avenue to speak to his fellow New Yorkers about the Civilian Review Board.

His welcoming committee was there in strength, passing out “Stop the Civilian Review Board” posters. Wherever you find Lindsay, you find the Conservative Party. An Irish guy in a tweed sport jacket was instructing the crowd that a “yes” vote on the referendum was a vote for Lindsay. In a sentence he told what the Conservative Party in this city is all about.

He was a big kid but not like his ancestors who worked the docks or the ones who wore shamrock-embroidered trunks under the Garden lights on long ago Friday nights. He had the weight, but it was going nowhere. His backside looked like a giant teardrop, probably from sitting too long on stools in the Knights of Columbus drinking 10-cent beer with his own kind to the tune of “The Ballad of the Green Beret.” Working with him was a short Italian in a windbreaker who was using the hard sell. He was insulting anyone who wouldn’t accept the Conservative Party-PBA literature. One woman complained to the Irish guy that his partner was hurting their cause with his rudeness, but with his collar turned up around his neck, street corner style, he moved through the crowd keeping up his attack. He said the Review Board was another offspring of Earl Warren’s court and hadn’t Warren “banned school prayer”?

Looking at this guy’s action, you couldn’t help thinking that the last time he saw the inside of a church was when he rifled the poor box when he was sixteen.

Two Negro kids crowded near the platform from which the mayor was going to speak. A great inspiration struck the two patriots. They scotch-taped two anti-Review Board stickers to the black kids’ leather jackets and smiled triumphantly at the nastiness of their joke.

Much sport has been made of Lindsay”s reference to New York as a “fun city”; not enough attention has been paid to the validity of his statement. He’ right; we have all the trappings of joy.

The helicopter came down in the Sheep Meadow of Prospect Park, and Lindsay arrived by car at Plaza Street minutes later. The first thing that strikes you about Lindsay is that he doesn’t look like a politician. Bob Wagner’s sad eyes make him look like a beleaguered basset hound; Frank O’Connor’s face has the decency of a guy who heads the Holy Name Society; and if you put Mario Procaccino in a white apron, he could hawk mackerel at the Fulton Fish Market. Lindsay’s good looks are theatrical, not handsome enough for Broadway, but one could picture him signing autographs at a matinee in Bucks County.

A nice-looking kid in a blazer spotted Lindsay coming through the crowd and began to shout, “Here comes the guy who’s for social security raises, welfare, and unions.” Here is this kid who never said “en garde” to his chin with a Wilkinson sword blade sounding like an honest-to-God John Paul Getty, crying creeping socialism and the whole lot.

As the mayor mounted the platform, you heard everything from a bravo to a Bronx cheer. He tried to speak, but the teardrop wrapped in tweed started to chant, “Stop the Civilian Review Board.” A guy wearing work clothes and sporting a beard turned to him and told him to shut up and give the mayor a chance to speak. The guy in tweeds muttered something, and the beard told him that there should be an ethical review board to examine his lack of manners. The tweed eyed the size of the guy and decided to shut up. Right away you knew this was one Hibernian who wouldn’t have gone one round in the Garden. Lindsay looked gratefully at his ally and began to speak again. He explained how the Review Board has been in effect since July and that New York City had peacefully passed through a summer that had plagued other cities throughout the nation. He spoke about how traditionally in a democratic system we have always reviewed the conduct of our various agencies. A woman in the rear of the crowd contorted her face into an anguished prune and began to recite a litany of hate at the mayor. “You are for niggers, taxes, and filth, and you are through in this city.”

Lindsay stared unseeing above her head and continued speaking. He explained that the majority of the complaints received by the board came from whites, and that 85 percent of all complaints were dismissed as frivolous. A slight woman in her fifties held a “Stop the Review Board” sign; she constantly kept her head down so that she wouldn’t have to look at the mayor. Not once during his entire speech did she raise her head to look at him. In memory, only Bela Lugosi showed that kind of dedication in his aversion to crucifixes.

Much sport has been made of Lindsay”s reference to New York as a “fun city”; not enough attention has been paid to the validity of his statement. He’ right; we have all the trappings of joy. We have a skyline that sends foreign visitors back to their homes with tales of a storied kingdom. Stand outside any office building in midtown, and the most gorgeous women in the world spin through revolving doors. On a summer afternoon you can go to the Big A and see Kelso and Gun Bow go head and head for a mile and a quarter in a rhymed couplet. Sit in the grass with a can of beer and watch the grace of two Puerto Rican teams playing softball. Their delight is expressed in their language, as quick and exciting as a young Ray Robinson’s left jab. You can drink German beer in Luchow’s on Sunday afternoon or belt boilermakers in Ireland’s 32, or sip brandy after the theater in Shor’s next to Gleason, Arcaro, and Graziano. You can put on a tie on Sunday and go to a museum and see anything from a brown and gold Rembrandt to a red and white Campbell’s soup can. When the wife’s lumpy mashed potatoes and overdone steak get you down, with a subway token and five bucks you can sample anything from flaming shish kebab to Indian curried lamb. And if you are looking for music, you just have to move up and down the scale of the city’s streets. From the Met to Arthur to Roseland to a dime-a-dance joint, from the Clancy Brothers lamenting about “The Troubles” to Miriam Makeba clicking her African magic.

What the hell has happened to us? New Yorkers have lost their sense of style.

And if the whole world is a stage, we straddle the globe itself. We have Garland at the Palace and Hamlet in Central Park. Melissa Hayden will show you a beautiful arabesque at Lincoln Center, and Ann Corio will show you practically anything on Forty-third Street. You can be baffled by a happening in the Village or sentimentally reminded of Fanny Brice at the Winter Garden or be astounded by Zero Mostel as he becomes a rhinoceros onstage. And when the dark night of the soul comes and you feel like the most hopeless human on the face of the earth, you can go to Shea Stadium and watch the futility of the Mets and come home feeling like Norman Vincent Peale after he authored his book on positive thinking.

In a city that traditionally loved to see Jimmy Walker and the Little Flower hit the streets we can read about Lindsay playing touch football in the park or walking the city streets in shirt sleeves.

What the hell has happened to us? New Yorkers have lost their sense of style. Without style, life is reduced to arteries pumping blood, kidneys doing what they should, and hearts functioning as used car engines. To hear the critics of this city you would think we were something out of a Hogarth drawing. Nothing but rape, drunkenness, and violence. 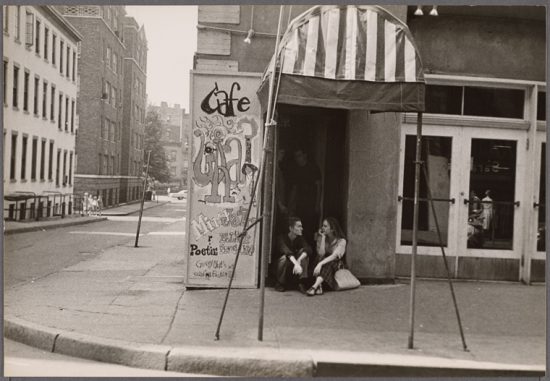 How can our women be loving and generous when their mates are hysterical and fear-ridden? In the history of broaddom, from caveman to Bogey, women have always liked their men to be brave and cool.

We have all the intrigue of the Casbah, yet our souls are somewhere in Levittown. Once our streets exploded with the sounds of kids playing stickball, ring-a-levio, and kick-the-can. Now Grimm women spin themselves into their lace curtains and hang by their windows, and at the first sound of laughter and play they tap, hiss, and wave the kids away with their wandlike fingers.

Where can we begin? How can you bring music into the hearts of people who think John Gambling plays pretty groovy stuff? How can you get people to walk into Central Park to see Hamlet, when they’re out of town visiting Peyton Place? How can you explain the Big A to a city of bingo players? What can be done for people who think that when Puerto Ricans speak they just jabber? How in the hell can you explain Toots Shor’s to a guy who does his boozing at the Knights of Columbus or the American Legion? How can you sell shish kebab to a bunch of guys whose bellies are molded like mushy mashed potatoes? Even our cop-outs, the Mets, have sent their leprechaun manager back to Glendale and hired solid Wes Westrum, who turned them into a respectable ninth-place team. When Lindsay plays football on Sunday, we declare he’s squandering the taxpayer’s time and money.

Jack Kennedy is adored in bars with a James Dean reverence. We love him better in death, because the truth is that his ideas and his enthusiasm scared the hell out of us.

The truth of it all is that we have the most magnificent playpen in the world, but we are childless. New Yorkers have become crotchety childless people living within a barren gray womb. Our lady in the harbor is without husband or lover; her maternal existence is a lie.

We would rather have the fatigue of Wagner than the vitality of Lindsay. Jack Kennedy is adored in bars with a James Dean reverence. We love him better in death, because the truth is that his ideas and his enthusiasm scared the hell out of us. We are a people of Wagners and Eisenhowers and Johnsons; we are more comfortable with a waspish nanny than with virile young men.

The sadness that shrouds Lindsay is that he thinks he is fighting for a Civilian Review Board. This is only the preliminary—the main bout is to restore some generosity and fun to this dreary city.